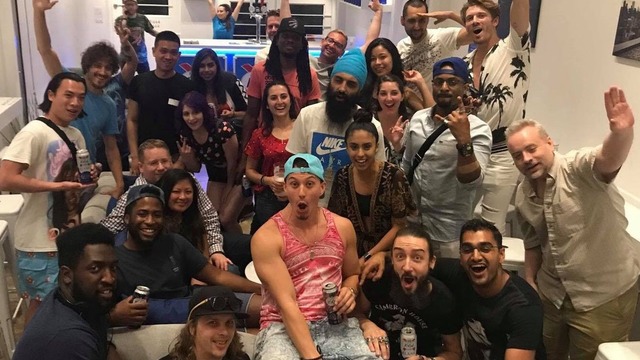 Nobody can create an original song and music video every day for an entire year.

I’m not talking about some cell phone or webcam videos. I’m talking full blown camera crew with multiple angles and a concept for each video.

Every one said it couldn’t be done…but we did it.

We set the world record for most original songs with music videos released in a single year.

What started as a dare, because of the insanely unreasonable amount of work involved; turned into a commitment to myself that no matter what, I will see the goal through.

Both knowing that we’ve seen the newest episode of the podcast, saying things would really happen for an artist if they did a 365 challenge with music videos. We chuckled about how people are doing it half-ass with their front facing camera in their bedroom.

But what if it was done right? And mixed right? And delivered daily with awesome posts?

We immediately agreed on a vision and found a common goal. We did a handshake contract to work together and got to work. Just like that.

We started shooting in October 2017 knowing that it would be tough to keep up once 2018 kicked off and we had to start delivering daily cuts. After having some rocky relationships in my career, I’d finally found a dream-come-true-team. It seemed like I had finally paid enough dues to get a real shot at doing something special.

I was finally ready to stop talking and ready to start working. Full time. No excuses. Do it now.

Was it easy every single second? Absa-fucking-lutely not.

Did we gain some sort of third dimensional notoriety? That is yet to be seen. To be honest, most videos barely broke 100 views.

But we kept going.

Was it waaay more bountiful than sitting around and waiting for a more famous rapper to “choose me” and give me a spotlight? You can bet your ass it was.

Overall, I think I’ve learned to stay at peace no matter what the situation. Great things make their way into your life when you’re balanced. Shitty surprises only happen when you don’t check in regularly.

I’ve made some incredible friends during this 365 journey, some people I’d say that I even look up to in a lot of ways, and what I was able to contribute every single time was a perspective of gratitude.

I use optimism to build my reality. We can all do this. No matter what.

You just have to try. And the fact is that most people don’t. They mentally psyche themselves out from doing the thing that could change everything and the dreams are dreamt but they’re never made.

If I learned anything from creating 365 original songs with 365 original music videos in 365 days, it’s this…

The person you’ve always wanted to become is on the other side of that ridiculously impossible challenge…and they’re waiting for you to become them.

Appreciate the beauty of the fact you don’t know what will happen and then do it anyways.

The people in history that do are always the ones we appreciate the most.

See All Past Events

ALERT: The Following Errors Were Encountered :

Please close this window and correct the information.